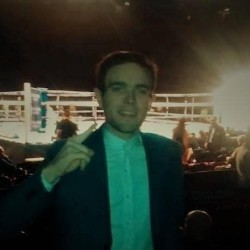 Indeed, he had barely exited his teens by the time he found himself firmly implanted in the Irish sporting consciousness, a podium effort at London 2012 ensuring his was a name with which we would always be familiar.

His exploits in the intervening years went some way to affirming that status, gold-medal triumphs at the Commonwealth, European and World Games pedestaling the Belfast man as the cream of a typically luscious crop.

He would enter the 2016 Olympics as not only RTÉ’s ‘Sportsperson of the Year’, but as their golden boy elect. A procession akin to that of Katie Taylor four years earlier was predicted, his to be the latest face carved into Irish boxing’s Mount Rushmore.

Alas, Conlan instead fell afoul of the biggest robbery to befall a Belfast man since the Northern Bank heist, his championship aspirations dashed by rogue officiating in Rio.

“I wanted to win Olympic gold. My dream’s been shattered now. But you know what? I’ve a big career ahead of me. And these guys? They’re known for being cheats, and that’s all they’ll ever be.”

He set about making good on that promise soon after, announcing his decision to enter boxing’s paid ranks under the tutelage of Top Rank Inc.

That everybody from Muhammad Ali to Floyd Mayweather have made their bow under the Bob Arum banner speak for the company which Conlan plans to hold hereafter.

Likewise, given his professional debut has long-since been pegged for Madison Square Garden, the breadth of his ambitions has rarely been in doubt.

“I’m honoured and privileged to start off my career in the mecca of boxing,” he reflects.

“It is something I never dreamed would be possible. I have the hopes of a nation behind me and I can’t wait to go out and put on a performance for Ireland.”

That Friday’s fight-night coincides with St Patrick’s weekend only heightens the sense of intrigue in that regard, as does Conlan’s choice of entourage.

One Conor McGregor is set to be cast in a supporting role this time around, the UFC’s champion emeritus keen to lend his sizeable seal of approval to Ireland’s next big thing.

‘We’re not here to take part, we’re here to take over’ was how the Dubliner famously framed Ireland’s fighting resurgence, after all.

The air of anticipation surrounding Michael Conlan this week suggests the cavalry may well have arrived.

Football | John Egan proving crucial at both ends of the...

David - July 9, 2020
0
We use cookies to ensure that we give you the best experience on our website. If you continue to use this site we will assume that you are happy with it.OkPrivacy policy